In the 80’s, a company was founded in Holland, called Audiophile Products. The rumour said -and it was even written- that Mr Goro Fokadu founded it, but … Herman van den Dungen did!

At that time, the company was mainly used for kind of audio-hobby activities with a few friends. We were experimenting with record-weights (yes, we were melting lead at that time in the kitchen) and record clamps, building tone-arms (we made a Dutch version of the Hadcock arm which was for a while hobby-wise a co-op with Mr Eddy Driessen from Pluto Audio), producing PinPoints (the European version of TipToes) -also known as CounterFeet by Sumiko- for placing under loudspeakers and electronics, the Record Interface Mats (which we also produced for Oracle), the Record Interface Clamp, the CD Interface Mats (several thousands were sold by Herman’s Gryphon friend Flemming Rasmussen) and so on …

Herman van den Dungen also owned Durob Audio (he still does). Durob Audio distributes different brands and at that time was also the European distributor for Koetsu cartridges. The Koetsu cartridges were manufactured by Yoshiaki Sugano. Dave Fletcher (from Sumiko and also designer of The Arm) handled Koetsu business in the US and Durob Audio was taking care of Europe; each of us getting around 30 cartridges per month, delivery strictly prepaid. Communication was quite difficult, with hands and feet and a German dictionary, since Sugano’s daughter only spoke a bit of German next to her native language. That created very funny and expensive situations while Herman and she were trying to talk over the phone in the middle of the night in German; the first 5 minutes were not much more than Hallo, Hallo, Hallo … until the operator, listening to us, interrupted us to say “this call is going to be damned expensive if you only say Hallo!”.

At a certain moment both Dave and Herman felt that things were not going as smooth as before. Deliveries were delayed while payments were made; cartridges sounded differently. We had to pick the best sounding ones and we were sending back the wrong ones. Sugano’s reaction was quite incoherent: we had to pay very high costs for repair while the cartridges were new! Also delays were getting huge. Situation became out of control.

One day, Herman did not receive his ordered and paid cartridges in time. Searching for info, he found out that instead of shipping to Holland, the cartridges were sent to Switzerland. Sugano’s excuse was that Switzerland did not belong to Europe! Well it was time to wake up and take action…

Herman had been a few times in Japan and next to visiting Mr. Sugano, he also hung out with the local high-end guys. Mr. Kondo (Audio Note), Mr. Nakanishi (RF Entreprises and Stellavox), Mr. Suzuki (from a big high-end shop in Akihabara), Mr. Keeske Abe (young man from a rich family developing Metropole Electrostatics) are the names he remembers. He visited numerous factories. At that time, Japanese engineers started leaving the big companies like Sony, Panasonic to begin their own little cottage business. One of them, Mr. Kondo agreed to design and produce a special transformer for Herman. The first one he got was in a kind of “cigar box”, but it worked very well. In his hotel room Herman designed a housing for this transformer and a week later he had a sample of the MCT1 Silver transformer. He took it back home in Holland and everybody who listened to it agreed it was a nice piece. 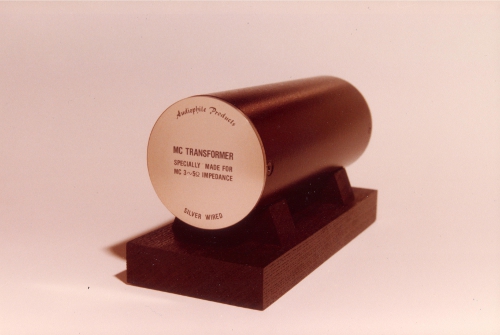 Herman felt that they were going to run into a problematic situation with Koetsu. So, he contacted Dave Fletcher in USA and asked him about his situation. They agreed to talk with a mutual friend / business contact: Mr. Yasuo Nakanishi. During CES Yasuo listened to their stories and promised as a friend to help them. Well, to make  a long story short … After some weeks Herman and Dave got a message that it was much better that a Japanese guy was handling the distribution instead of an American and an European guy. The Japanese guy was … “the friend” Yasuo Nakanishi, who was even so rude to ask Herman to give him a list of his customers with the necessary contact-details, so he could without any delay continue to supply the European market with Koetsu cartridges. Thank you Mr. van den Dungen, thank you Mr. Fletcher … And “no-thank-you” Yasuo … Although that decision turned out to be for Herman the beginning of a sensational new project … because …

The other step Herman had taken, was contacting some of his Japanese friends and explained them that he needed extremely urgently a new cartridge to compete with Koetsu. At least same quality and if possible lower in price. In the Netherlands he made a hand-drawing for the body of a cartridge, his friends who Herman was making the tone arms with (and small parts for worldchampionship mini-aviation speedmachines) made immediately 6 aluminium bodies and those were sent to 3 cartridge makers in Japan. Specs and details were given (and yes, these were close to those of Koetsu), suggestions for better sound added and as an extra they asked for consistent reproduction possibility of the quality and a best price. Herman could add some of his own ideas and he could emphasize on what he wanted and certainly on what he did not want as he had built up in the meantime a lot of experience. With diamond shapes, internal damping, magnets, charging of magnets etc.  Once the 6 cartridges were sent to Holland Herman and his team did many blind tests in different set ups and finally decided for the new cartridge. It is true, that one of the manufacturers was Dynavector, and Herman knew Dr. Tominari and Mr. Takefumi Fujimoto very well, but the new cartridge was not built into their facilities. And unlike somewhere in the press was suggested, Herman has never been a Dynavector distributor.

But what the hell, Herman had a new cartridge and a “name” was needed. Herman asked one of his Japanese friends the Japanese translation of “I make a new start”. The answer was “Atara shii kadode” or something like that. Herman answered back “too long to print on a cartridge as brand name”. So he asked for the Japanese translation of  “miracle”. The answer was … “Kiseki”. Herman jumped 10 meters high. A new brand name was born and what a beautiful name to follow up his former Koetsu child which was kidnapped from him and Dave in such a rude way by one of our high-end family members …

The next thing was to convince the market that there was a new cartridge, the Kiseki Blue, which could compete with their former Kid, the Koetsu Black. Herman realized that the only way to convince the market was to convince his former clients, the Koetsu distributors. So a first batch was made and in the meantime the approved sample was sent out to one of them, the one who was most known for his analog specialism and for his skills in for example making a very famous tone-arm. Very soon after Herman got a message that if he could keep up the sound quality in production, could offer it at the same price as the Koetsu Black and supply in a regular way, an order would be placed immediately for 100 pieces. Well, Herman confirmed he could, and even at a lower price than the Koetsu Black. His opinion was important for the other clients and the market and Kiseki was accepted as a high quality phono cartridge. Some of Herman’s old Koetsu distributors, also started to distribute Kiseki, some did not as they thought it was too confusing and some said they were gonna distribute it, but kept it out of their country for years …. L. But anyway, Herman was in heaven and was selling about 150-200 cartridges a month instead of 30.

One year before entering the market with Kiseki, Dan D’Agostino introduced his Krell electronics. Immediately the market recognized the quality of his designs and as a high-end distributor there was only one brand on Herman’s list: Krell. Well, Dan had heard in the meantime about the Kiseki cartridges and was interested to distribute Kiseki in USA, and so it happened. Dan started distribution of Kiseki and Herman started distribution of Krell. Later on Herman developed and manufactured CoGelCo silver cables and these were also distributed by Krell and for a while Herman even supplied CoGelCo signal cables for use inside the Krell amplifiers.

When the cd entered the market the record sales dropped to an unbelievable low level. Record shops were forced to pick up the CD format and records disappeared very fast from the shops. At least in The Netherlands were Philips / Phonogram was “KING”. Kiseki sales also dropped quite a bit and due to other projects -opening of first high-end shop- Kiseki became soon a sweet memory. Now in 2011 all these memories are a main reason for a refreshing and exciting project: “Atara Shii Kadode”. I make a new start with KISEKI.